You are here: Home › Projects › The “Gender Offender” analysis: How and Why We Did It (Part Two) This aspect of the project was undertaken by Stuart Palmer.

This data on creative roles in films contains within it the information to describe the networked structure of creative team relationships embodied in the film set analysed. Social network analysis (SNA) provides methods for visualising these group relations, and through quantitative measures that characterise network features, provides methods for identifying strategically important components and participants in the network. It also therefore points to ways in which these networks can be most effectively “undone”.

How We Did It

In order to produce the SNA visualisations some data cleaning was required on the names of people, as a small number of names were recorded differently for the same person where they had made creative contributions on multiple films.

Further preparation of the data was required to turn multi-word person names and film titles into single terms for ease of further processing.

The following step-by-step description details the process for film producers, but the same process was also followed for directors and writers.

The preceding data on creative roles was output as an MS Excel file, and the following data processing steps were completed in MS Excel before work on the visualisations could begin:

The following general steps were performed to produce the creative network visualizations:

Using the Gephi layout procedure described above, the following network shows the connections between producers and other creatives in the entire data set used – purple nodes are male.

Using the Gephi layout procedure described above, and the source data for male creatives only, the following network shows the connections between male producers and other male creatives – pink nodes are male creatives who never worked with a female creative in the data set used. 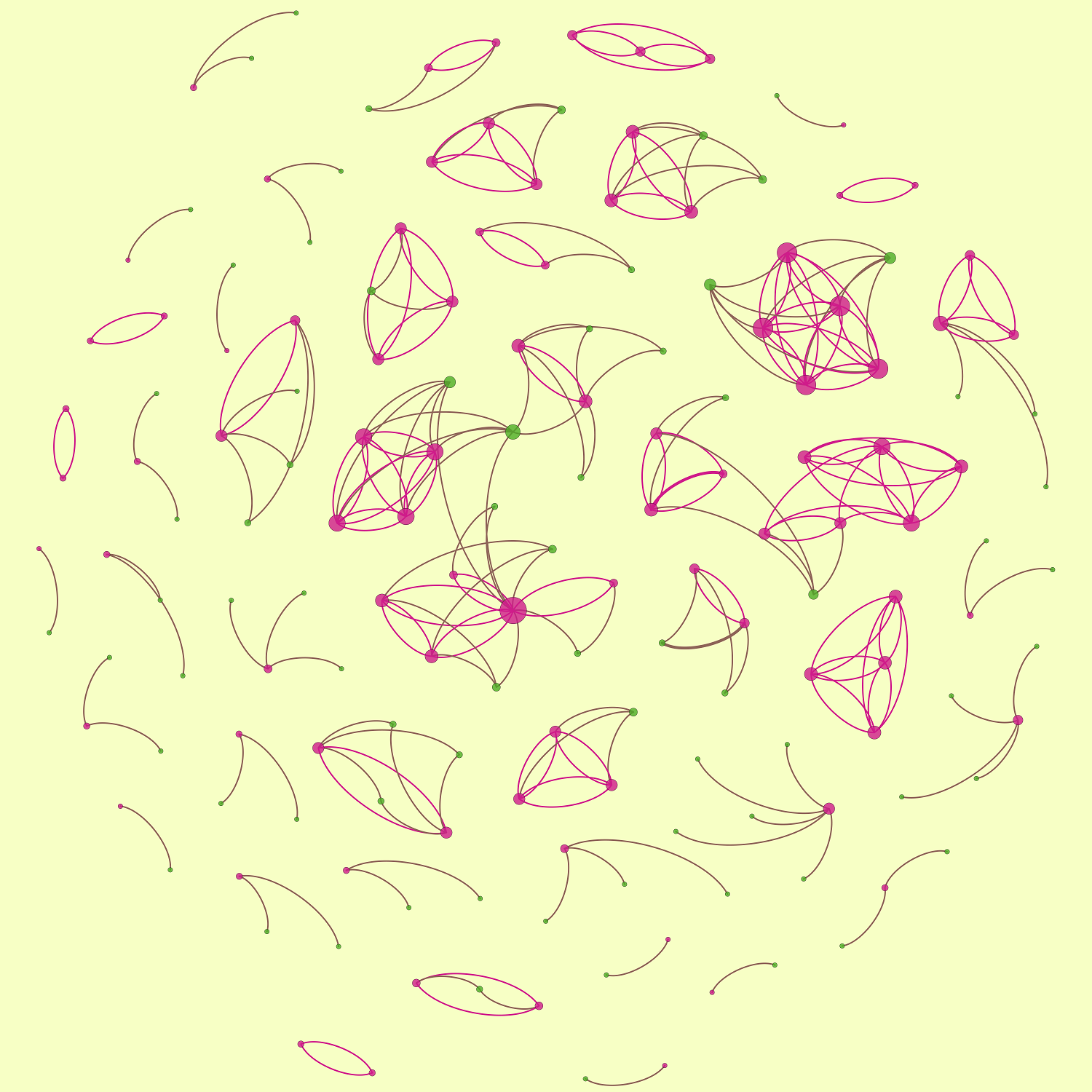 Using the Visualizations to understand how change is possible

Network visualisations are useful for observing the implicit structure in the film data, and identifying the key connected creative players. By adding the dimension of gender to these visualizations we can clearly see the influence of gender on patterns of domination in the film industry. Our concern however was to see beyond these patterns and look for ways in which the data could suggest the most effective interventions in the changing the status quo.

There is some precedent in approaching network visualizations in this way. Crime experts and counter terrorist specialists have used “criminal network analysis” for example to identify opportunities to undermine the coherence of dominant groups.

Drawing on the literature on the use of social networks to characterise criminal networks and identify key nodes whose removal would disrupt the network (i.e., Borgatti, 2006; Rostami & Mondani, 2015; Schwartz & Rouselle, 2009), we investigated the network of male-only producers and other creatives immediately above. We used Borgatti’s network fragmentation factor (F) (equation 4 in (Borgatti, 2006)) as a quantitative measure of network disruption. F is 0 when there is no fragmentation (all nodes connected in a single component), and is 1 when all nodes are isolated. Gephi provides the data required to compute F for a given network configuration. F was calculated for the initial network, a candidate node was removed, and F was recalculated to assess the impact of the node removal on network fragmentation.