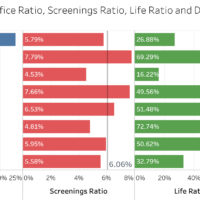 A research paper “Understanding the dynamics between the United States and Australian film markets: testing the ‘10% rule’” by Kinomatics members Vejune Zemaityte, Deb Verhoeven and Bronwyn Coate has been recently published in the Studies in Australasian Cinema Journal.

In this article, we compare Australia and the US as markets for American movies against the anecdotal perception that distributors follow a ‘10% rule’ to predict the popularity of Hollywood titles abroad. According to this ‘rule,’ American films are expected to earn around one-tenth of their domestic box office receipts when screened in Australia. The rule is often invoked by industry members to guide local P&A expenditure and to measure the relative success or failure of US titles in the Australian market.

On a comparative basis, we discovered that American films overall tend to earn 11.5% of their home box office takings in Australia. Also, we found that Hollywood features generate those earnings while typically only receiving 6.1% of their domestic screenings in Australia, staying in theatres for 50.6% of their home runs, and arriving with a 38-day release delay.

We also looked at variation in comparative Australian-American earnings, screenings, and runs as well as release delay per production origin, genre, and distributor.

We noticed significant differences in the relative count of screenings between the two markets when it came to the type of origin. Australian exhibitors demonstrated a stronger preference than Americans towards co-productions with the US that typically received 8.4% of their American screenings in Australia, while single origin American productions only got 5.8% of their home screenings here.

We also saw significant differences in relative earnings and runs between the countries as well as release delay among genres. Australian audiences showed a stronger preference than Americans towards documentaries and suspense/thriller films that typically grossed 23.4% and 15.5% of their domestic earnings here, while a weaker than Americans liking of action/adventure and horror movies, which typically brought in only 9.4% and 6.7% of their home box office receipts in Australia.

Australian exhibitors favoured animations (staying 72.7% of the US run in Australia) and suspense/thriller films (69.3%), while they dedicated comparatively shorter runs to music/event movies (16.2%).

Distributors typically booked action adventure movies, comedies, and animations with the shortest delays of 16, 17, and 19 days, respectively, while delivering documentaries to Australian audiences with the longest lag in our dataset of 158.5 days.

Lastly, we detected significant differences in the relative earnings and runs between the countries as well as release delay among distributors. Australian audiences showed a stronger preference than Americans towards independently distributed movies compared to films circulated by mini-majors, which respectively typically earned 13.5% versus 9.9% of their domestic takings in Australia.

In contrast, Australian exhibitors favoured movies distributed by majors more than American distributors (53.4% of the comparative US run) and independently distributed titles less (39%).

Finally, majors typically delivered their movies to Australia with a shorter delay than independents (23 versus 65 days).

With this study, we make an evidence-based contribution to wider debates about the impact of ‘Americanisation’ on Australian culture, especially as it is experienced through popular cultural forms such as the cinema. We show in our analysis that the belief of Australia being a proportional, perfectly formed microcosm of American cultural preferences is largely unsubstantiated as the preferences of the distributors, exhibitors, and audiences differ between the countries.