You are here: Home › Projects › Journal Articles › Counting the cost of cinema ticket prices in Australia 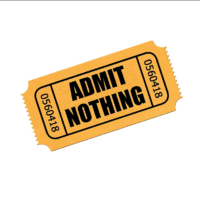 Not ones to avoid a debate Deb and Bron have returned to the fray with another article on cinema ticket pricing, this time looking at how cinema ticket prices in Australia have increased in recent years and how the Aussie experience of price hikes compares to price increases internationally. Drawing on evidence sourced from Screen Australia, the OECD and the Australian Bureau of Statistics (ABS) Bron and Deb show that Australian cinema ticket prices are at their highest in real terms in near to three decades.

While the higher prices are attributable to a number of factors including the increased numbers of 3D and premium class screens, the question of what higher prices mean for audiences is a key point of focus in the new research. The latest Household Expenditure Survey conducted by the ABS reveals that cinemagoing has become more prevalent in high income households and yet has been falling in the households lying in the bottom income quartile. This suggests that a night out at the cinema is increasingly being viewed by some as a luxury where demand depends not only on price but also on income. This is especially the case in households feeling the pinch associated with high costs of living more generally.

As an implication of this, Bron and Deb suggest that to increase audiences and maximize their revenue potential, cinemas need to also turn their focus to price differentiation not only at the top end of the market which has proved successful but also at the bottom end by offering more discounting to attract audiences in catchment areas that are deterred by higher prices from attending the cinema.

A further finding of interest from the research is debunking the perception that we pay more on average to visit the cinema in Australia. The experience of rising cinema prices has been a global one and certainly among OECD countries Australians pay close to the OECD average with citizens in the US paying the least and those living in Japan paying the most to attend the cinema (the following chart compares how many minutes of paid work are required to purchase a cinema ticket across OECD countries): 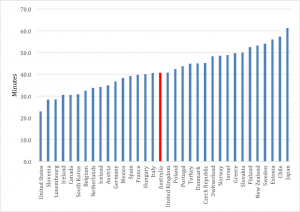 Implications about cinema ticket prices in the research conducted by Deb and Bron have previously been discussed in The Conversation (https://theconversation.com/only-at-the-movies-home-truths-about-cinema-ticket-pricing-25820 ) and the industry magazine, if.com.au (http://if.com.au/2015/07/28/article/PKAYUTGTET.html ).